Berlin: Henceforth known as a place where my year long romance with German classes rendered useless. The following quote perfectly explains why…

“The worst thing about being a tourist, is having other tourists recognize you as a tourist.” – Russell Baker

All jokes aside, my four day long adventure in Berlin may perhaps be one of the greatest decisions of my life. While I say this about almost every new place I venture to, except for Glasgow, going to Berlin included a whole new sense of emotions. This city made countless appearances in all the literature of my German classes of the past year. For those that do not know, I am a quarter German, and spent the last year trying desperately to prove some sort of cultural identity by taking language classes in school. I, being book smart, easily aced the classes; grammar patterns and memorizing verbs a painfully simply task. However, actually speaking the language was a beast I rarely liked to poke.

Nevertheless, when I contacted my cousin Sandra in hopes of having a connection to explore the infamous city, I did so with the good intention of putting those classes to good use. When I landed in Berlin, gained a new stamp for my passport, and hastily walked to the arrivals section of the airport, I saw my cousin eagerly waiting for me. “Hallo, wie geht es dir?” She asked excitedly. Even though I knew exactly what she said, hello how are you, my nerves and sudden realization of my true incompetence with the language caused me to freeze up. Laughing, she made a comment on how she would speak English to me. And hence, for the remainder of my four days in Berlin, broken English rang throughout my ears.

The small defeat of a language barrier did not stop me from enjoying every precious moment of Berlin. While the first day consisted mainly of riding the bus back to my cousin’s tiny, yet charming, flat, the next day contained twelve miles worth of adventure.

On the Sunday of my whirlwind trip, every single monument and place I read about in my textbooks became a reality. Alexanderplatz, Checkpoint Charlie, the Holocaust Memorial, Humbolt University, the Wall, Cathedrals, Charlottenburg Castle, the Branderburger Tor, and so much more… 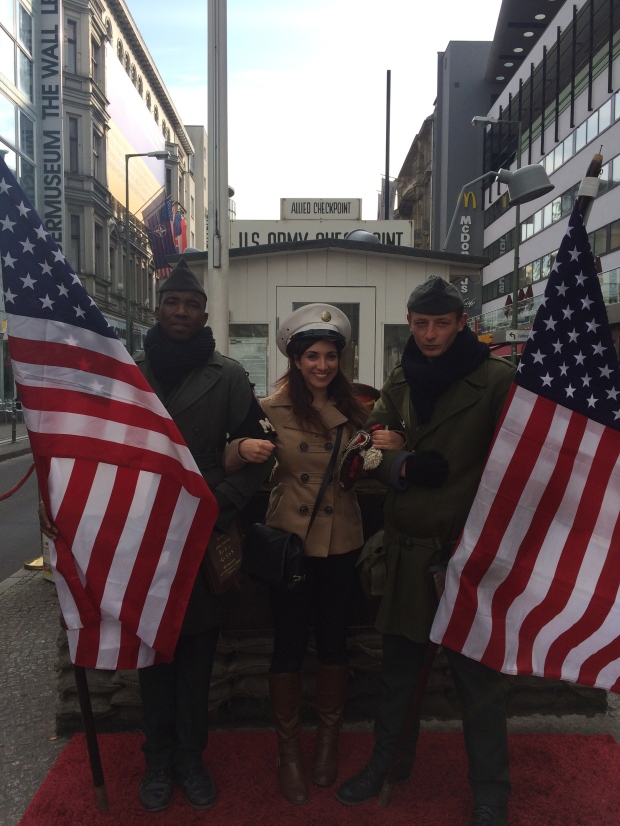 Everything overwhelmed me in the best possible way. The entire day, my tourist status became painfully obvious. At each new site, I craned my neck, looking up in awe and exclaiming, “Wow… just, wow.”

Not one thing can be ranked as more amazing than the other, no single event more spectacular or magnificent. However, I will say that seeing the Holocaust Memorial tugged my heart strings. There is some eerie about walking through the stones. The further into them you go, the higher they become, mimicking senses of fear and hopelessness. It is a truly haunting experience.

After hours of walking, and no lunch, our empty bellies demanded to be heard. Making my tourist status blatantly obvious once more, I tried currywurst. If anyone does not know what currywurst is: you should. It is delicious and strange and incredible. I could not eat it without feeling slightly guilty, but in the best possible way.

The next two days revealed just as exciting and activity filled as the first. More walking and exploring random nooks and crannies of Berlin took place. The city is quirky and hipster and fun, the perfect place for any person with an adventurous soul. I especially recommend taking the chance to explore the east side. While I only spent a few hours there, I could already tell it to be a whole different beast.

Berlin left me with inspired, energized, and renewed. The creative vibes of the city are found around every corner. Artwork paints the streets, every building or free space holds a different story to interpret and appreciate. Sandra was right when she confessed it takes years, actually, to get to know the city and truly understand it. I feel as though I could spend decades roaming about the streets, and still never quite shed my tourist skin. Whether or not that would be because my expression, frozen in a constant state of bewilderment, would immediately given me away, I do not know. All I am confident in, is the undeniable fact that Berlin is a city with so much history and beauty and experiences to offer; every person should venture to this place at some point in his or her lifetime.

Wednesday morning, with enough postcards to build a small army, I said my goodbyes to Berlin. Refreshed from a change in scenery, sounds, and smells, my entire soul craved more German journeys. Leaving Sandra filled me with bittersweet emotions; visiting her for the first time after twelve years gave me the most incredible memories. I am eternally grateful for all she did for me in my time there. However, the growing hunger for travel filled my entire being as I boarded the bus to begin an eight hour trip to my next destination: Goch.